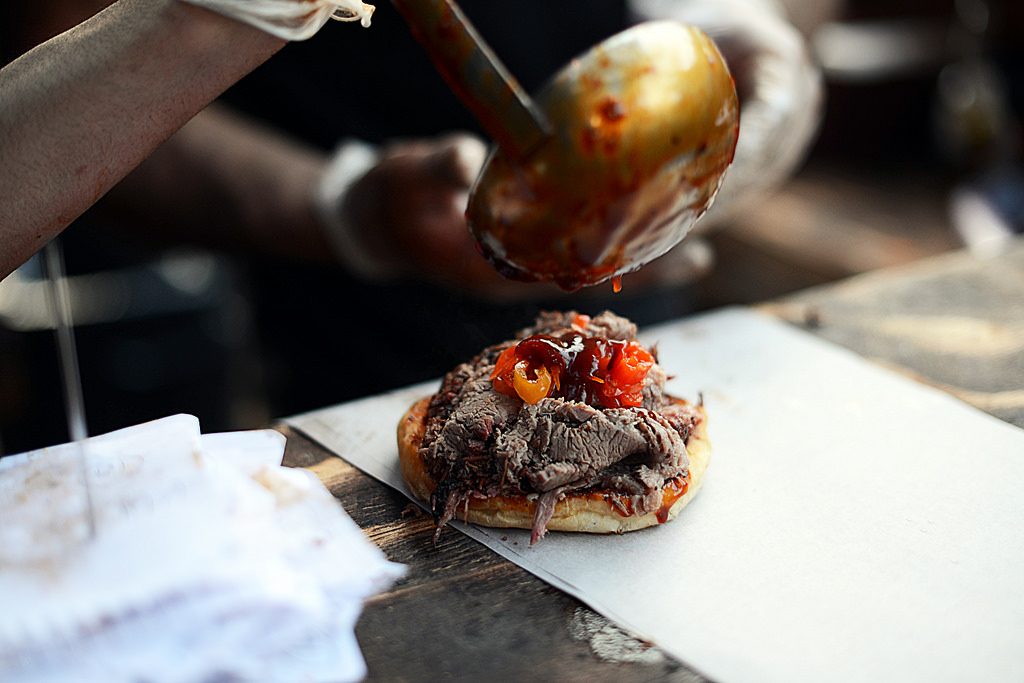 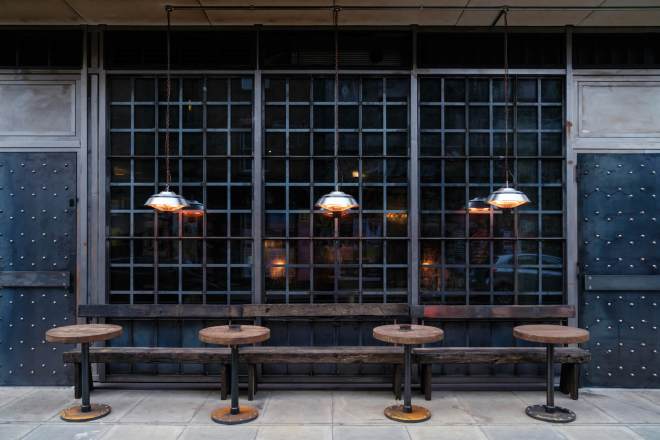 This review ends where it begins: with crispy pig tails. A ramekin of cube-shaped hunks, unassuming but for their deep mahogany lacquer, comprising a roof-of-the-mouth-botheringly crisp outer and a melting interior that cossets the tongue and speaks to the soul.

Once bitten, forever smitten. Indeed, so seduced are we by the Smokestak snack that we order another round to add extra savour to our sweet course – but more on that later.

Smokestak founder David Carter is a lovely man who makes a lovely brisket. Since he started up his street food business, most of my female foodie friends have had a crush on him, and ditto their male counterparts. Men want to be him, women want to be with him, and, if tonight’s packed dining room is anything to go by, anyone with a good palate and an appetite for a great night out wants to be in his first bricks-and-mortar barbecue venue in Shoreditch.

For reasons known only to him, LB has opted to wear a white shirt. Latterly, I will doff my cap to him for managing to keep it pristine, but as the first wave of dishes rapidly covers the diminutive bare wood table, I find his sartorial decision questionable. Because this is rude food: gloriously fatty, richly-glazed, best eaten by hand. Saucy in every sense of the word.

Smokestak exudes edgy glamour – deliciously dark and pretty damn sexy; the restaurant equivalent of a devilishly-handsome yet rough-edged villain. It’s a place to people-watch, make your way through the concise, precise cocktail list in the tiny basement bar, and feast with companions who care to share. It is not a place to count calories.

The entire menu is an ode to fat in all its fabulous forms. Arteries block, hearts melt, stars burst behind eyelids. The term ‘foodgasm’ is a vulgar Insta-phrase, but you’d be hard-pressed to find one more apt to describe any and every dish we sample – and, to add context, that’s pretty much everything available.

Short, strong, spot-on cocktails prime our palates – notably, the burnt peach-laced, bourbon-based Old-Fashioned. Along with those pig tails we snack – or rather fall – upon vast puffs of spiced crackling, and crumbed cubes of slow-cooked oxtail made still smokier when swooshed through the accompanying mayo. A whisper of a woody dried herb in the rashers of cured pork jowl which perch atop friable fried crispbread turns a simple dish into something to shout about.

Actually, I lie – we do enjoy the latter two, but, driven by meat lust, forgo the bun in favour of a larger, carbless portion of brisket, and subsequently kick ourselves so hard that our rear ends still bear marks days later. Take heed: I confess our folly purely so you avoid the same mistake.

But whichever way you serve it, that brisket is unrivalled, and our naked slices are devoured as swiftly (if less messily) than a pair of pork ribs and a singular one of beef. Pickled cucumbers are a nice accompaniment, additional barbecue sauce a less-necessary presence on the plate. When meat is this magical, anything else is just window dressing.

Unless, of course, it’s Smokestak’s humbly-named ‘jacket potato’ – a majestic half-spud whose crunchy shell is an incredibly edible vehicle for a terribly rich and horribly moreish mix of potato, butter, and some sort of béchamel that’s clearly been whipped up by the angels David has working in the back.

LB looks a little queasy at the prospect of pud, but a round of plum sours soon perks him up. Continuing on the five-a-day front, we plunge spoons through velvety malt ice cream into a tart plum crumble.

Then things get really fruity. Sticky toffee pudding is all well and good (and this one is really good), but, being all about texture and swavoury flavours, my palate’s calling out for something crunchy and salty to accompany it – and that something so happens to be the aforementioned pig tails. Sounds weird, tastes sensational, and I strongly recommend the pairing be put on the menu.

But then, there’s very little I wouldn’t strongly recommend here. Given my longtime affection for Smokestak, I wanted to love it, but that didn’t mean I’d love it. Thankfully, I love it.