The Peacock at Rowsley, Derbyshire 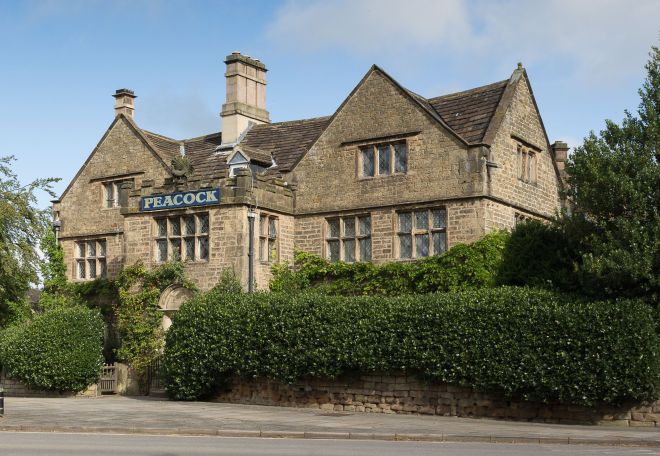 Confession time: we went to Bakewell and committed a culinary crime.

Any fule kno you’re supposed to buy your sweet treats from the town’s Old Original Bakewell Pudding Shop, whose once-owner Mrs. Wilson put the eponymous baked item on the menu – and Britain’s culinary map – back in 1921, but, owing to heavy rain and the proximity of a parking space, we opted instead for the delights purloined by The Bakewell Tart Shop.

And what’s more, we went for the heathen’s choice – aka the shortcrust tart version rather than its puffy, puddingy predecessor.

As we took our leave, the town’s purists may well have already been circulating a petition to have us stoned for our flagrant disregard for tradition. But if so, we remained blissfully ignorant: safely back in the car, stuffing our faces with the spoils and passing towns whose names inspired our Bond villain alter egos: Lickpenny and Dethick.

Parading around The Peacock

We arrive in Matlock with the car’s interior newly-decorated with buttery pastry crumbs, smears of rich frangipane and sticky jam fingerprints; as though Storm Callum had snuck in through the air vents and wreaked havoc. It’s not just our vehicle who’s feeling the effects of our consumption – both LB and I are in dire need of a lie down.

Thankfully we’ve parked up within staggering distance of The Peacock, where we’re checking in to check out the Grade 2-listed, triple AA Rosette-d restaurant-with-rooms owned by Lord and Lady Edward Manners, who reside just up the road at Haddon Hall.

Operating as a hotel since 1832, the 17th-century former manor house is a beaut; the styling of its 15 bedrooms, bar and restaurant deftly swerving twee country house overload whilst retaining many traditional elements which honour the building’s heritage; including Violet Manners’s society portraits.

Through our room’s lovely leaded windows we can see it’s still tipping it down, so instead of actually going to local caverns like the charmingly-named Devil’s Arse, we visit vicariously via the medium of a comprehensive guest information folder. Then, exhausted from our explorations, we snuggle down to watch a Four In A Bed omnibus in which none of the featured hostelries are as nice as the one from which we’re watching.

Were we not so easily pleased by daytime programming, we could have got our audiovisual kicks from The Peacock’s ample DVD library. We’ve also been invited to participate in homemade shortbread, but after our excessive Bakewell intake, to do so seems somewhat (over)gluttonous.

After LB’s obligatory nap and my attempt to melt away some of the calories by lying in a scalding hot bath for an hour, we make our way to the bar: a snug space with thick stone walls, a low ceiling and an open fire, where the olde world vibe makes you feel like something in your pitch-perfect margarita has spun you back a century or three.

Reading the menu, however, brings you firmly back into the present. The Peacock’s longtime head chef Dan Smith’s modern British food evolves in step with the seasons, based around local produce. Dan’s dish descriptions are taciturn, proffered merely as lists of key components. But each set of ingredients reads like culinary poetry – or at the very least, as a crash course in what works with what on a plate.

Having put paid to a lilliputian truffled mushroom soup with a brown crab arancini – one of those amuses you’d happily supersize in lieu of a real meal – we move though to the understated, bijou dining room where we’re accosted by a bread basket whose contents threaten to stop us in our tracks before starters: the most notable culprit a damp, dark treacle loaf.

We dine respectively from land and sea. I can’t resist the starter which absolutely epitomises a British autumn: gamey grouse, elderberries, a lentil and black pudding ragout, and a silken, ingenious riff on bread sauce based on toasted croissants. LB’s gone with an altogether more exotic affair, where delicate white crab meat meets yuzu mayo and warm dashi broth.

Puds – sticky toffee pudding and a bittersweet Casa Luker chocolate tart with prunes and chestnuts – are good, but most exceptional is a pre-dessert of Mirabelle plum granita, chantilly cream and a fudgy hedgerow sorbet whose parts, in spite of their chilly temperatures, collectively conjure the experience of eating a fruit crumble with custard.

Fullness and fatigue preclude a nightcap back in the bar, so instead it’s more in-bed telly and a satisfying night’s sleep – one which I carry on right through until after LB has returned from a breakfast whose setup and execution he deems ‘absolute perfection’.

It’s high praise coming from someone as well-acquainted with morning goods as he – but then The Peacock is worthy of high praise all round.