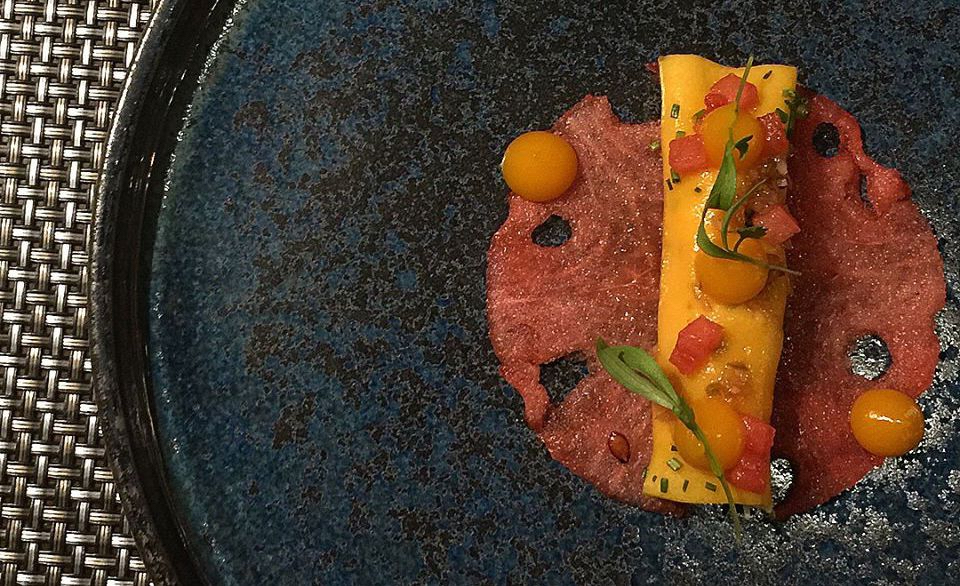 The White Hart at Lydgate, Lancashire 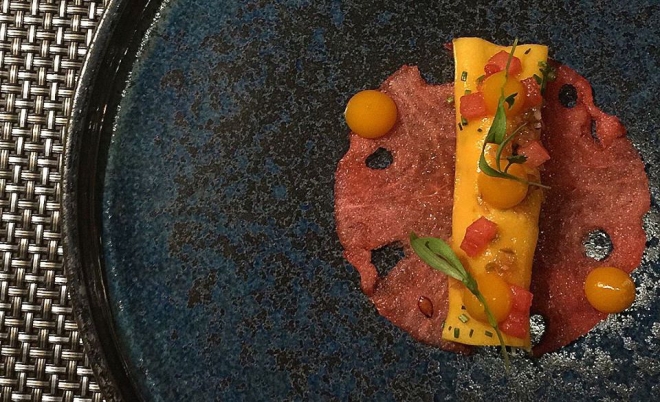 There’s no such thing as perfection, but at The White Hart, chef Mike Shaw’s tasting menu comes pretty close. And, says Zoë Perrett, the rooms are rather nice too…

For anyone in a 9-5 job, the onset of September frequently induces a severe case of the back-to-school blues. But for those of us reckless/feckless enough to pursue a freelance lifestyle, it’s the perfect time to indulge in a midweek minibreak whilst everyone else is stuck in the office. Work perks and all that…

And so it goes that, on a Thursday afternoon when we probably should have been updating spreadsheets and answering business enquiries, we find ourselves checking in to The White Hart at Lydgate, where the sun has finally made his way through the seemingly impenetrable greyness and is coming out to play. 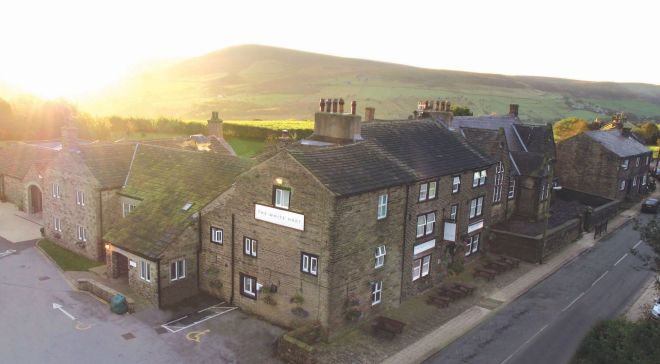 But we’re not playing ball. We know we really should embark on a meandering exploration of the verdant Pennines atop which The White Hart is perched, but we’re tired and our family-sized room – located in a cottage just up the road – boasts both a bathtub and a big flat-screen telly.

With its jolly mismatched textiles, yellow-and-blue colour palette and high, beamed ceiling, it’s a thoroughly pleasant place to while away an afternoon. We really don’t want to leave, so we don’t; opting instead to fritter away the time until dinner consuming vast cups of tea and home-made shortbread, watching re-runs of Murder, She Wrote, and luxuriating in baths made bubbly with various complimentary Molton Brown potions. I’ve said it before and I’ll say it again: we’re the most rock’n’roll couple you’ll ever meet. 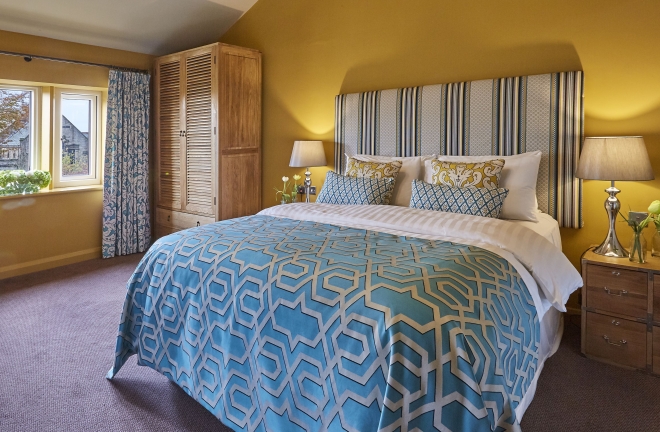 Two g&ts and a packet of nuts

By 7.30pm it’s high time to swap the Yorkshire Tea for something stronger, so we dress for dinner and head for the bar, stopping to admire the view that falls steeply away from the churchyard opposite down to Oldham below. But only briefly, because LB is in dire need of a small nut.

A packet of dry-roasted and a g&t apiece later, we move from the pub bar through to The White Hart’s more formal Dining Room restaurant. The room is gorgeous; stylishly furnished and done out in approximately 50 shades of grey (but far, far more tasteful than the eponymous novel).

With a seven-course tasting menu in prospect, a pair of event profs like us should know better than to hit the bread basket, but when LB requests not one but two pieces from the proffered receptacle I get serious FOMO and follow suit. The potato and rosemary loaf is tasty of crumb and crisp of crust, but the pumpkernickel is something else: a knockout number that’s as moist and flavoursome as a good old-fashioned malt loaf. 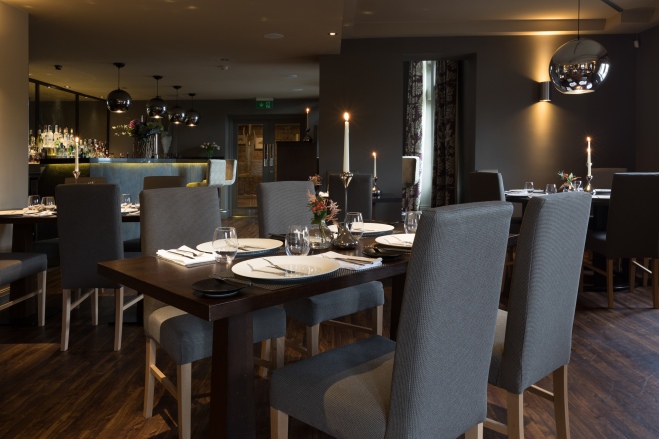 When a lobster amuse arrives partially submerged in a rich, ozone-y sauce that tastes like liquid moules mariniere, we’re already kicking ourselves for not saving a slice for mopping up. And, as the meal progresses involving many more delectable, wipeable things of this order, we have the same regret over and over again.

The dish which follows is the one I like the sound of the least; it transpires to be of my favourites. I love it when that happens. It’s easy on both eye and palate: a circular raft of watermelon whose colourful passenger is a roll of mango flesh filled with delicate coriander-infused crab meat. It’s sit-up-and-take-notice food.

It’s becoming clearer by the course that chef Mike Shaw is a passed master when it comes to the aforementioned sit-up-and-take-notice food. Trained under Raymond Blanc and Gordon Ramsey and offered a position at legendary California restaurant The French Laundry, he’s got the on-paper pedigree – but he’s also got that innate understanding of ingredients and flavours which no amount of culinary training can instil. 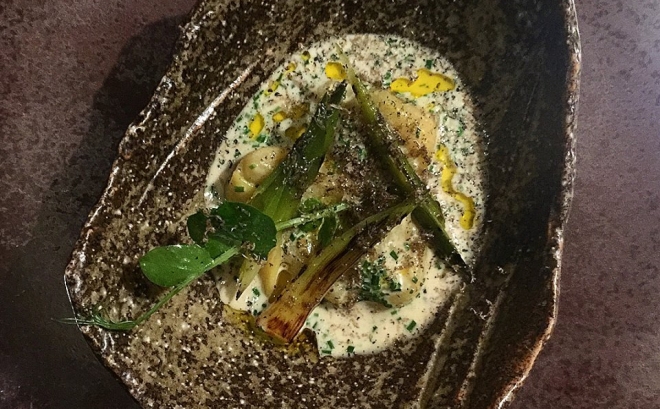 LB might claim to hate mushrooms, but he loves the heavily-fungi-featuring tortellini dish as much as I do (although I think I might love its successor – monkfish whose creamy curried sauce is infused with an unlikely, stupidly successful combo of vanilla and lemon – even more. Maybe even more than I love LB, in fact…).

Our sole carnivorous course features a double whammy of roasted duck and foie gras; the proteins’ inherent richness kept skilfully in check through the addition of sour plums, pak choi and tiny turnips. LB is done but for a dainty nibble on his strawberry, set goat milk and balsamic pudding, whilst I soldier on through the silkiest of caramel tarts and a savoury finale of Lancashire blue cheese. Admittedly, we drink the wines rather than making notes about them, but suffice to say each pairing is thoroughly appreciated. 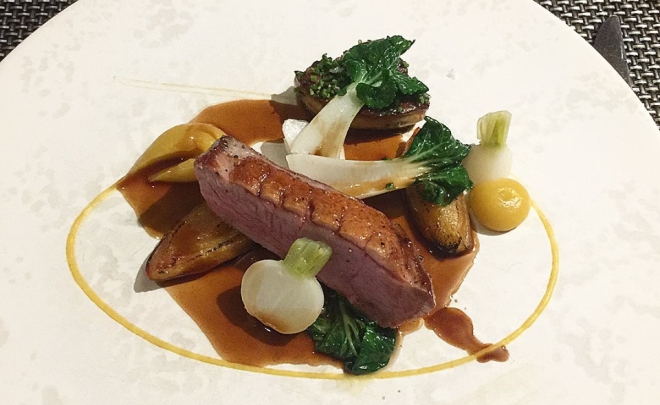 The practice of anointing dishes with edible swipes, splashes and dots to both enhance aesthetics and show off a chef’s technical skill has become ridiculously widespread, but it’s far less common to find that each element actually adds something to the eating experience. In a galaxy of this ‘Morse code food’, Mike Shaw gets his messages across loud and clear. There is not a single unnecessary component on any of this chef’s plates.

Brilliantly executed in every sense – knowledgeably and affably served; well-paced and balanced; constructed from great-quality produce; satiating without stuffing you silly; and, at just £85 per head with matched wines, shockingly good value; this meal should probably be held up as the gold standard when it comes to tasting menus. 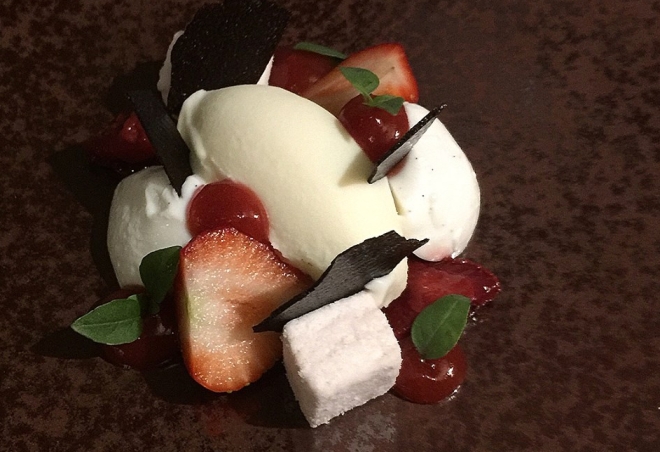 And, like us, you should probably stay overnight so you can eat and drink with impunity, then go and dream about it all over again.