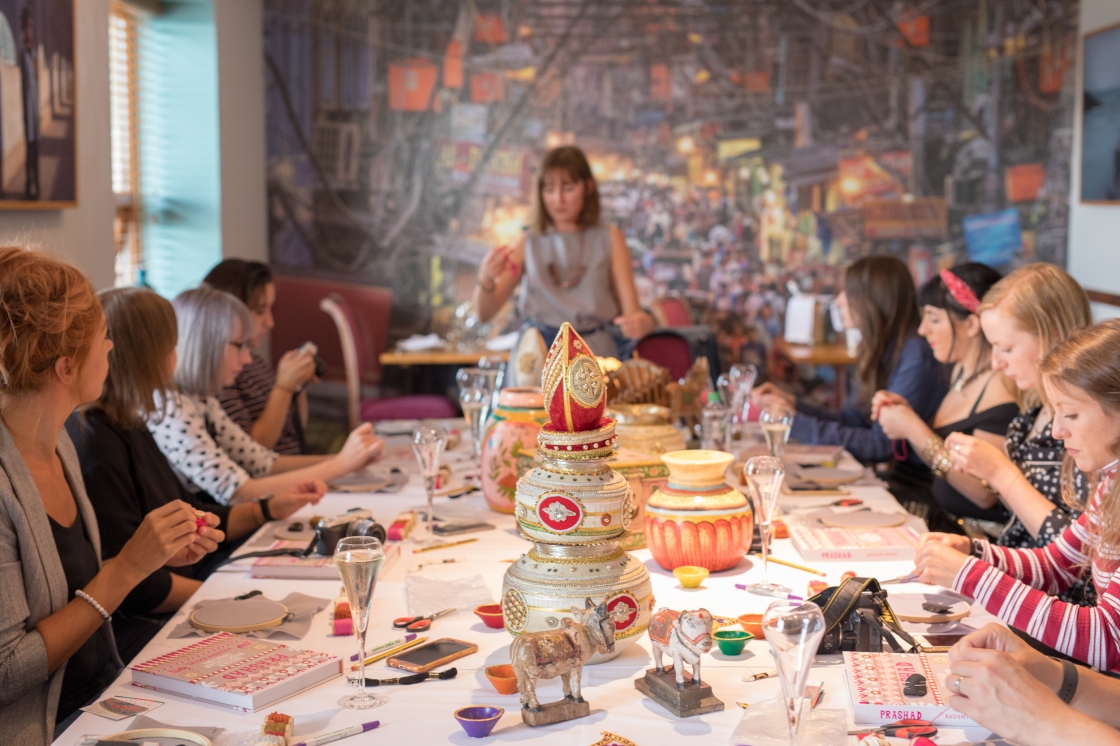 Leeds Leads: The art of craft & Indian food at Prashad 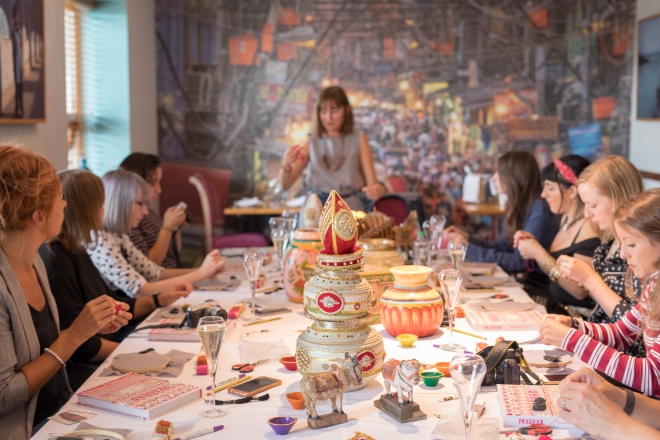 At Michelin-rated Leeds restaurant Prashad, Zoë Perrett revels in both the fine Indian vegetarian food and in exploring her crafty side…

Rock’n’roll. Mac’n’cheese. Salt’n’Pepa. All natural and somewhat iconic bedfellows that trip off the tongue. But craft’n’curry? I’m willing to wager that most will consider the latter a somewhat unusual coupling (albeit an alliteratively alluring one).

But then Prashad is not a restaurant to abide by convention. One only has to glance at the legendary Indian venue’s menu to understand that these guys go their own way – and have done since Kaushy and Mohan Patel converted a Drighlington laundrette into a Gujarati deli a quarter of a century ago.

A 2010 runner-up position in Ramsay’s Best Restaurant and a couple of cookbooks down the line, Prashad is now in the hands of a new dream team: owned by the founders’ son Bobby, with his wife Minal running the kitchen. Together, the couple has achieved the triumvirate which forms the hospitality industry Holy Grail: slickness of operation, quality of food, and warmth of service.

As they should be, the accolades are abundant – indeed, a full wall of Michelin Bib Gourmand-ed Prasad’s private dining room is papered with rave reviews from publications local and national alike. Their unfussy presentation and discreet positioning is very deliberate: Bobby says they used to be in fancy frames, front and centre, but it all felt too ‘ego’.

Better, he feels, to focus on the food, and the service, and all the actually important things that mean that the Patel’s customers continue to hold Prashad in high esteem. Complacency is anathema: menus change frequently, the venue evolves, and they’re always up for offering something a little offbeat.

Like the new concept touched upon in the opening paragraph. ‘Curry’ is a lazy term for the vast culinary remit of South Asia, but you can’t contest that ‘craft and curry’ is somewhat snappier than ‘craft and Indian food’.

But I digress. Nomenclature aside, the basic idea is that you come for a workshop and stay on for a five-course feast. Every month, the craft will be a different one; on this occasion, it’s embroidery, which I can’t deny scares the bejesus out of me. I’d be more inclined to deem myself ‘a cackhanded so-and-so’ than ‘a crafty sew-and-sew’. 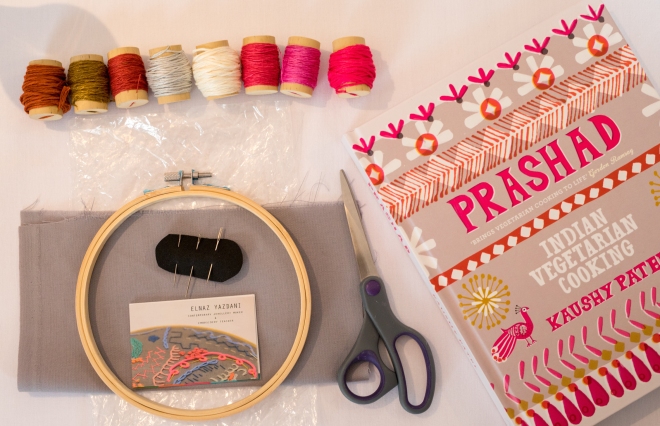 I am not alone in my trepidation. Of our group of nine, no-one knows their backstitch from their backside. Not that our tutor Elnaz Yazdani is the least bit deterred by professed ineptitude. Within minutes, she has us hooping up and stabbing our needles in and out of our fabric canvases like the experts we absolutely aren’t.

To give the two halves of the evening some synergy, Elnaz has woven the Indian food theme through her workshop by inviting us to draw inspiration from the colours, patterns and motifs in Prashad’s beautiful hardcover cookbook. Having ‘mastered’ running stitch, back stitch, seed stitch and something I call ‘Saturn stitch’ (until I am informed some days later that it’s actually ‘satin stitch’), I embroider a border, a crooked pink heart, and an elephant that would make this thirtysomething the proudest five year-old in Reception Class.

But everyone knows that it’s the taking part that counts, and two whole hours later we’re all fully invested in our mini-masterpieces. Called to the dinner table, I try to speedily Saturn – satin, whatever – stitch the remainder of my elephant’s body, but I have to leave him half naked, packed into a bag along with the rest of my embroidery kit to finish off later at home.

We move through to the private dining room which maintains the restaurant’s overarching aesthetic; utilising a very Indian mixture of rich textiles and colourful, folky pieces of furniture. The result is smart yet homely – like when you go round to tea at someone’s house where they’ve just done a bloody great job of the whole shebang.

First up, sanku. Minal was adamant she wasn’t putting your standard samosa on the menu despite that snack being a perennial crowd-pleaser, so this is her compromise: a Cornetto-like assembly comprising a pastry cone, a verdant, vibrant green chutney that’s one of the finest examples I’ve ever encountered, and spiced broad beans – a filling which changes seasonally. With bright, clean flavours and a satisfying crunch, it does everything a starter should.

‘Good things come in small packages’ is an adage which doesn’t always ring true, but one which could have been penned in honour of the kopra pethi which arrives next. Teamed with earthy beet chutney and offset by the peppery heat of fresh rocket, this deep-fried, spiced coconut and potato sphere is a thing of sheer joy. 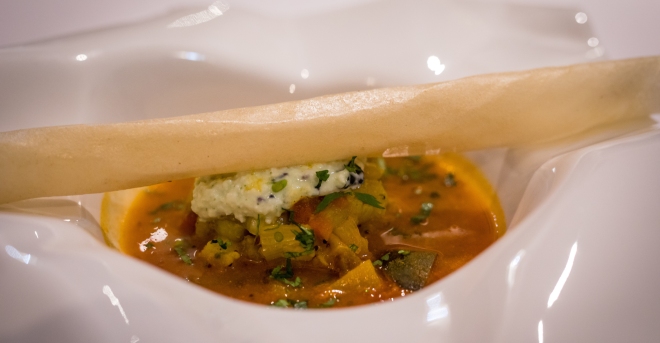 These small snackerels seem to have only increased my appetite, so something more substantial is welcomed with an eager fork. For a simple rice and lentil crêpe, a dosa is a complex and temperamental beast – its batter wont to under-or over-ferment; its cooking a thing demanding skill and patience. Minal’s are perfect: tangy, crunchy, light.

And the re-imagining of a classic Indian masala dosa plated in a Western style is bang-on – the crêpe perched on the side of a deep dish bearing a small pile of spiced potatoes crowned with coconut chutney, surrounded not by a jus but sambhar – a lentil stew whose multilayered flavours are beguiling and addictive.

The ‘Frenchification’ of Indian food is not new, but frequently loses something in translation and is clumsy in its execution. What is far more novel is when it occurs successfully. Bobby notes Gaggan Anand – a highly-innovative Indian chef with a much-vaunted Bangkok restaurant – as a master craftsman of this skill. Minal may be much less molecular in her approach, but she, too, knows exactly how it should be done. 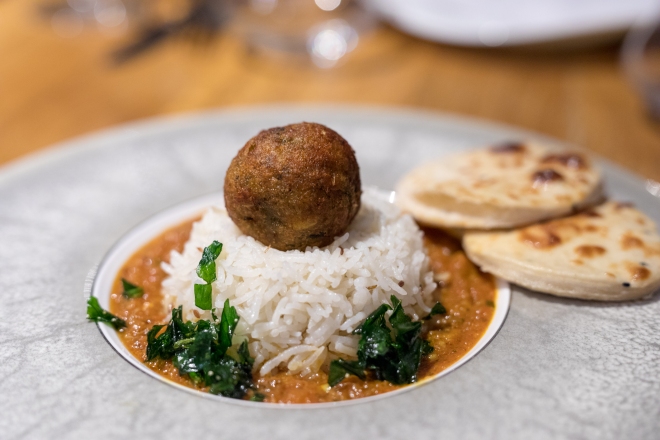 Further evidence comes in the form of the final savoury course: a vegetable kofta perched atop a carefully-sculpted mound of rice; its moat a slightly-sweet vegetable curry destined to be sopped up with two tiny, tender naan. The sublime seasoning of the starches demonstrates a cook with an adept understanding of salt as well as spice – and the former’s role in teasing out the nuances of the latter.

Judicious – the health police may say generous – use of salt is, in my firm opinion, the difference between tasting food in flat black and white versus in glorious 4HD technicolour. Particularly Indian food, or indeed any complex cuisine where myriad ingredients require unifying into a harmonious flavour.

Saline wisdom/rant aside, we’re onto the sweet stuff. Crisp filo encloses a warmly-spiced almond and walnut filling in a cigar-shaped, baklava-like assembly, the flavour of the accompanying raisin-and-nutmeg ice cream is pure bread and butter pudding, and a star anise moulded in milk chocolate is a treat as opposed to the penance of inadvertently biting into the spice it’s shaped for.

Suitably-sated and newly (and dubiously) skilled, it’s time to depart. Prashad has long been regarded as a triumph and continues to be so, and with good reason. It’s got heart, it’s got soul, it’s got damn fine food, and, now, it also has crafts in its arsenal.