Love sun, sea and sand but want more from your family holiday? This Canarian island is the place for you, says Zoë Perrett

Beaches. Lava fields. Cacti. Palm trees. Aloe vera museums. Gaudy sculptures. You only have to spend five minutes driving through Lanzarote’s incredibly diverse landscape to see that this is an island of contrasts.

It’s also the perfect place for a family holiday; ticking every box from ‘kid-friendly beaches with sunloungers for the grown-ups’ to ‘abundant opportunities for cultural and cerebral development’. And with the latter, I don’t mean dry and dusty. I mean exploring an imposing crater, navigating an underground network of lava tunnels, and visiting a house built into a series of volcanic bubbles.

I mention volcanoes often, because they’re impossible to escape on Lanzarote. Indeed, every souvenir shop offers a gloriously tasteful(!) picture frame hewn from volcanic rock in various sizes, and my own wrist now bears a bracelet whose beads alternate between the same substance and peridot, a semi-precious green gemstone found hidden inside lava rocks.

But before souvenirs comes the trip itself. We hire a car, which, when you prefer independent exploration to being tied to the timetables and conventions of group excursions is a no-brainer, even if it does mean LB, as the sole driver in this relationship, has to rein in his gintonica consumption rather more than he’d wish.

For the first couple of days, the car serves little purpose other than to occupy a parking space in Matagorda, a south coast resort whose close proximity to the airport offers more excitement than just making transfers a breeze.

But more of that later. Despite the wind that’s an ever-present feature of Lanzarote life, the warm April sunshine inspires a desire to do nothing more than laze on the beach as the kids build increasingly-complex sand-castles, -mansions and -people and scream in delighted shock when they risk a paddle and the icy Atlantic water washes over their ankles.

Too many hours of ice-cream fuelled inertia eventually shake me into action, and I amble off on an aimless walk along the coast path. In the distance I can see a fence which seems to have attracted quite a crowd. It looks fairly unremarkable to me, but what do I know?

As I draw nearer, I realise the crane-like metal structure jutting out into the sea is to guide incoming planes onto the landing strip which lies just the other side of the fence. I join the onlookers, and soon I’m caught directly in the headlights of an incoming jet. It’s a little bit terrifying and a lot exhilarating. As it zooms in directly over my head I can’t wait til the next one comes in – or to come back with a pair of small children who’ll love this even more.

We do indeed return on a surprise adventure, packing snacks and plenty of suncream and discovering that watching aeroplanes land is one of those fabulous free activities that’ll keep kids captivated forever and a day.

Having visited Lanzarote aged 8 – the same as LB’s oldest – I have a bit of an agenda, convinced that these two will be as enthused by the things I saw as a child as I was. And, following trips to Fundation Cesar Manrique, the Jameos del Agua and the Cuevos de los Verde, I’m proved right. Sadly, the Jardin de Cactus is closed when we attempt a visit, but LB’s prickly response as we approach the fields filled with spiky succulents indicate this may be a good thing.

The former attraction is named for the late, native artist closest to Lanzarote’s heart: Cesar Manrique, a painter, sculptor and architect who helped shaped much of the local landscape. Indeed, the island’s lack of high-rise hotels is owed to his lobbying for sympathetic development. If you’re a fan of Joan Miro, Dali, or Pablo Picasso, it’s likely you’ll be enamoured with his work – although this description doesn’t really do Manrique’s prolific oeuvre justice.

At the Fundation, you’ll find galleries showcasing Manrique’s 2D work, as well as some of his hypnotic mobile sculptures. Children and adults of a puerile disposition will take great pleasure in giggling at the symbols indicating male and female genders on the loo doors, and the whole family will fall in love with the series of rooms which have been built into a quintet of subterranean lava bubbles; not to mention the spectacular views of the surrounding, sprawling lava fields. 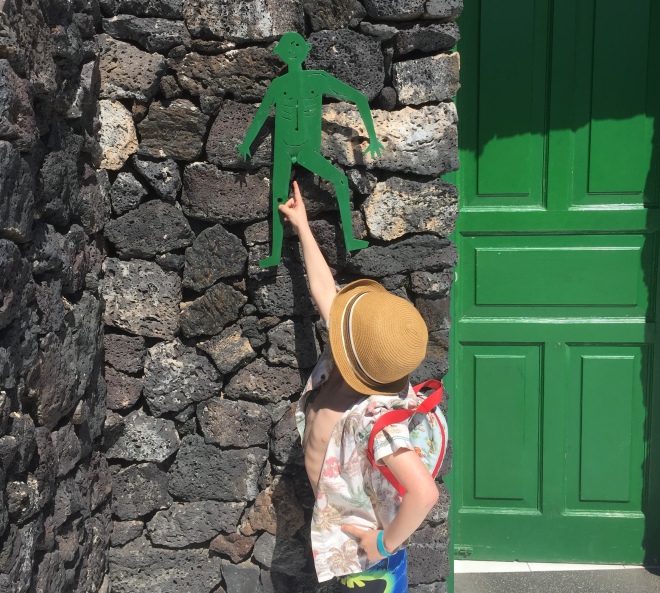 Returning to the car, we decide to drive towards a big brown hill – latter revealed by Googlemaps to be Volcano Woertens – notable for the yawning black chasm it wears low on one side. The crater’s imposing darkness proves too much for one small person, so the eldest and I set off hand in hand, being braver for one another than each of us feels for ourselves. The presence of a big house beside us whose washing line lies right up near the crater’s opening reassures us – surely no-one would position those flapping yellow tea-towels at the mouth of a danger zone?

It’s still eerie as we approach with no idea of how deep the crater might be. I’m starting to wonder whether this is one of those seemingly harmless adventures that’ll end up on some reality show about idiots with no respect for nature, ordering the little’un to stay back behind a safe boulder as I creep a bit nearer.

But my fears are unfounded – on our side, the crater shelves gently into its middle, its bright red floor giving way to black debris from the now-vertical sides of the tall cliffs opposite. It’s dramatic to say the least – and the real joy is that it’s ours and ours alone. As committed scientists, we select a few choice samples and make our way back to the vehicle where LB tries and fails to pretend he wasn’t about to send out a search party.

This experience whets the biggest’s appetite for all things volcanic, whilst the bitterness at choosing to not accompany us does the same for the smaller. So there’s little encouragement needed to embark on a tour of the Cuevos de los Verdes – even though mooting a 45-minute walk would usually require some form of bribery to be entertained.

Fans of stringent health and safety will be perturbed at the prospect of exploring an underground network of lava tunnels with two children, little briefing, and even less evidence of any kind of emergency procedures. But to our minds far greater dangers lie in unsupervised iPad usage, so on we press.

And we are richly rewarded. The tourist bumpf describes the Cuevos de los Verdes as a journey ‘into the bowels of the earth’, and it feels exactly that. The cave systems, created by ancient lava flows, seem to go on and on; alternately claustrophobic and expansive, even housing a theatre area with a small podium. It’s magnificent, majestic, and, when our guide pulls off a trick he makes us swear not to speak of with anyone who’s not done the tour, downright magical. 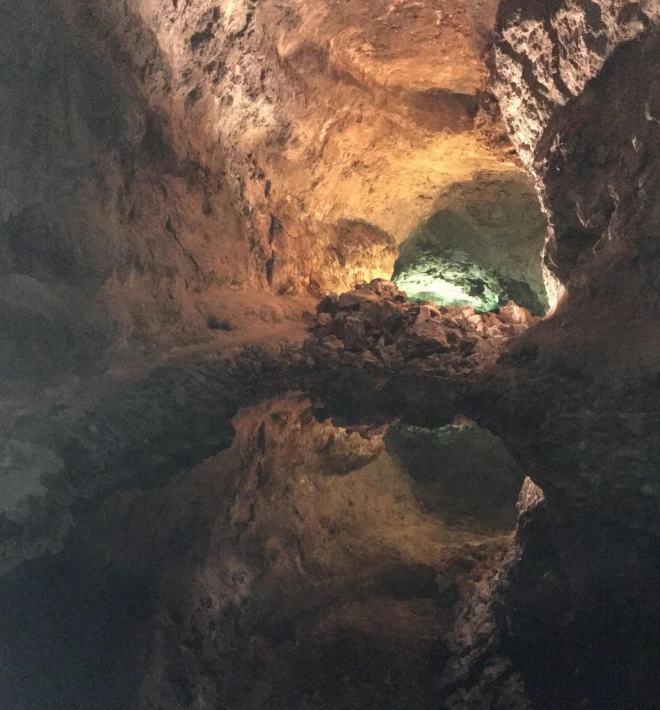 Eventually emerging into brilliant sunlight, it seems like we’ve been underground for far longer than we have – although it’s a unanimous verdict that we’d happily do it all over again right now.

Right now, though, the Jameos del Agua calls. Another typical example of Cesar Manrique’s signature art/nature fusion, its beauty is breathtaking. In fact, you’ll find yourself gasping over and over throughout your visit.

A steep descent finds us in a volcanic cave – and in what might be the world’s most stunning setting for a restaurant, and we curse our practical car picnic for robbing us of the need to dine here. The tables give way to a shockingly clear underground lake populated by albino crabs which exist here and here alone, around which we edge single file; first to an area configured as a dance floor, then up multiple slopes leading back to ground level.

The outside courtyard is dominated by a huge, brilliant blue pool whose junior incarnation is located at the Fundation Cesar Manrique. Everywhere you look, there’s another architectural gem squirrelled into the volcanic rock: a terrace, a bar, a flight of stairs. There’s an auditorium whose eerie acoustics are regularly tested by live music performances, and, as we discover with much mirth, the somewhat dated ‘House of Volcanoes’ – a museum which reminds LB of school trips way back in the seventies.

A trip to Timanfaya National Park to explore volcanos, visit geysers and hunt for gemstones is next on my agenda, but sadly so is a flight back to the UK. Lanzarote’s got one heck of a lot to offer, and it won’t be long before we come back to savour some more.

Where: Lanzarote, Gran Canaria
Find out more: For information on Cesar Manrique and Lanzarote’s many attractions both natural and man-made, click here