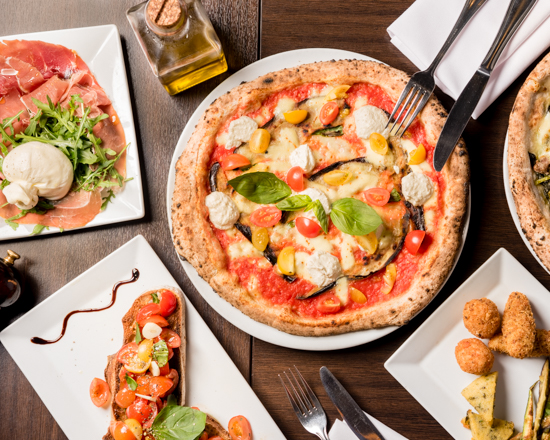 Good Things’ editor Zoë Perrett discovers how to have her pizza and eat it at this traditional Italian trattoria in ClaphamMuch like fashion, the food industry is a fast-paced place, and dining out often can speedily breed ennui. No matter how voracious your appetite for innovation, there comes a point where the latest concept makes your eyes roll rather than your stomach rumble, and you start to view posh meals as more Morse code than Michelin – largely comprised of dots and dashes of various purees, foams and emulsions.

Enter the epicurean equivalent of the Little Black Dress: the neighbourhood restaurant. A failsafe, timeless classic, having the right one up your sleeve can save many an occasion. It might not challenge or surprise, but it can certainly delight.

And we are delighted to discover old-school Italian trattoria Donna Margherita a mere 15 minutes from our own abode. Granted, we’re rather more than fashionably late to the party given that it’s been on Clapham’s Lavender Hill for the past 14 years, but these places typically mature like fine wines.

Talking of wine, there are a fair few listed. Over 100 in fact; divided by region, described both colourfully and at length. Many of them line the dark wood walls, drawing the eye upwards to a tiny mezzanine that’s decked out like an apartment balcony, complete with washing line strewn with women’s underwear.

If that’s quirky, then the menu’s solidly dependable – a long list of Neapolitan classics, few of which anyone of sound mind and solid appetite would spurn.

The pizza list’s siren song is already calling us, but, because it’s the staff of life and the neighbouring table’s looks so damn good, we begin with bread. We make a solemn pact to taste not feast, but we lock eyes as we sink our teeth into the hot, soft, scorched garlic flatbread and silently agree that some promises are made to be broken.

It may be a truism that dishes simply assembled from bought-in ingredients show little of the chef’s own prowess, but they certainly demonstrate the skill of Donna Margherita’s owner, Gabriele Vitale, when it comes to sourcing absolutely blinding produce.

A fat Buddha belly of burrata bursts at the nudge of a knife, its creamy centre blending with peppery rocket and saline, umami Parma ham in a mouthwatering menage a trois. Gabriele picks up on our praise, and comes over to rave about his cheese producer – asking me to name and acclaim Wiltshire-based Deluca, which supplies Donna Margherita with burrata, fior di latte and ricotta.

Cheese pleases me, so I’m only too happy to tuck into a cartwheel-like quattro formaggi pizza. Over the table, LB’s is garnering just as rapturous a reception, although the master of restraint manages to stop long before his greedy girlfriend. His features Italian sausage, mozzarella and friarelle – beautifully bitter, broccoli-like greens – and the piece I pinch in the name of research reveals the combination to be a winning one.

Yes, we eschewed Donna Margherita’s vast remit of pasta, meat and seafood dishes in favour of these humble discs of dough, but for good reason. ‘Passion’ is a word I hate with one of my own, but there are few others that so aptly describe the fervour with which Gabriele speaks of pizza.

The enviably-trim 44 year-old is almost bouncing on his heels as he explains his quest for the perfect crust. It transpires that slimline Gabriele was once obese; so much so that he had severe back problems requiring high-risk surgery – or dramatic weight loss.

He went for the latter, but wasn’t willing to forgo pizza. And why on earth would he be, when he likens the pleasure of eating a good one as akin to an exquisite orgasm? Instead, Gabriele started to research what makes so many recipes so unhealthy, and how he could create a great-tasting, bloat-busting number.

The answer lay in the dough; or, rather, the processed ingredients that constitute the stuff. Traditionally, Neapolitan pizzas were made from unrefined grains, salt and sugar but, much like in British bread industry, there was a mid-century, modish shift towards using bleached flour, white sugar and white salt – and a consequent increase in obesity and dietary diseases.

So Gabriele, head chef Claudio, and pizza chef Lorenzo took it back to the old school, using unrefined Type 1 rather than Doppio Zero flour and Himalayan pink salt; plus organic honey and yogurt in the sourdough starter. They intended to create a light, crisp crust with just the right amount of chew and, by jingo, they got it.

Happily, Donna Margherita’s health-conscious approach (which extends to tweaks in methodology and ingredients across the menu) is designed with pleasure and not penance in mind; meaning we feel no guilt about delving deep into a homemade tiramisu and a panna cotta whose wobble I swear causes a portrait of voluptuous icon Sophia Loren to gaze upon it with envy.

We depart following shots of frozen limoncello, to an uptempo rendition of ‘Happy Birthday’ destined for a local family celebrating in the corner. The dependable ‘Little Black Dress’ analogy definitely applies at this traditional trat, but thanks to Gabriele’s fresh thinking, it might be one that’s a little bit looser.