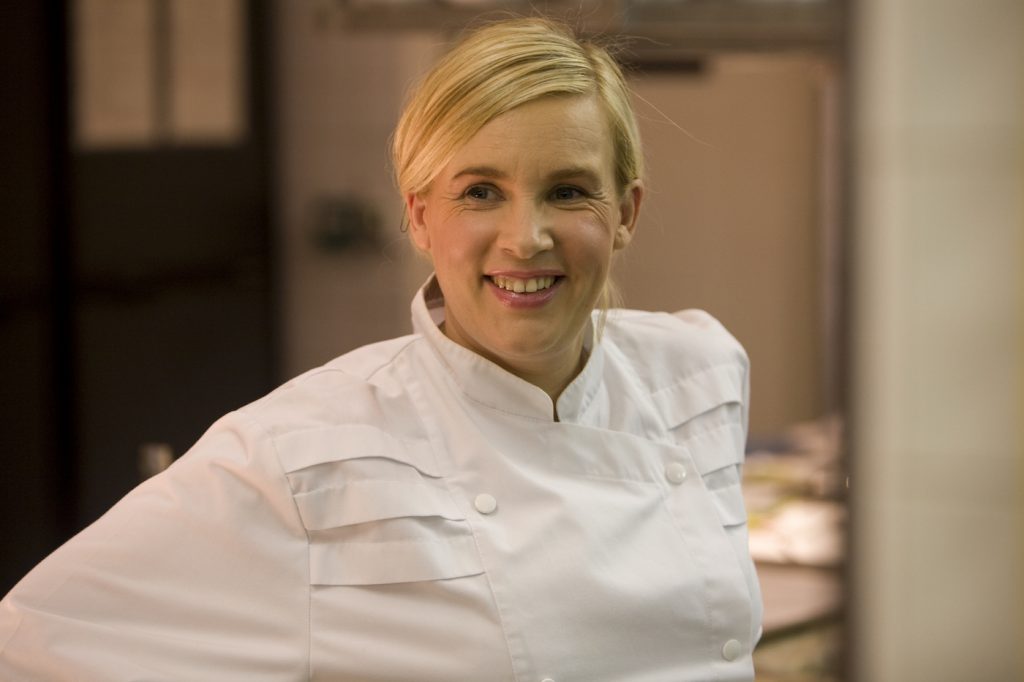 ‘The World’s Best Female Chef’ just cooked me dinner. And, as you’d expect, jolly nice it was too. Mein host’s brother is also in the house; here to share a few fine examples from the family Armagnac collection.

Hélène Darroze is not, perhaps, your typical two-Michelin-star-holding chef. Her lack of airs and graces and abundant warmth are clearly apparent as she introduces the menu for her one-off supperclub in Fortnum and Mason’s Fountain Restaurant. The feast will be family-style; something, says Darroze, ‘a little different’. She wants her assembled guests to have a bit of this and that, dipping in and out of multiple shared dishes. This food is not flashy; designed not so much to create conversation as to keep it flowing like the wine.

Fortnum’s is no stranger to hosting supperclubs; in fact, this is the final event before The Fountain undergoes an extensive refurbishment. Planned well in advance of the unguaranteed announcement of Darroze’s achievement (set to be formally announced at The World’s 50 Best Restaurants Awards in June), securing the chef as host has proved quite the serendipitous coup for the department store.

Predictably, after the revelation, tickets for a well-priced supper by the chef of both her eponymous Parisian restaurant and The Connaught in London became instantly elusive.

So my attendance indicates that I am clearly in with the in crowd, although one gets the distinct inkling that Darroze always aims for an atmosphere that’s far more ‘inclusive’ than ‘exclusive’. Tonight, the food definitely facilitates that feeling.

After a particularly potent Bas Armagnac cocktail chased with a few too many croquetas filled with molten Brebis Basque cheese, I take a pew and prepare for a religious experience. Whilst I wait for sustenance both spiritual and gastric, I heed the call of the bread basket; slathering Espelette pepper-laced butter onto tender, sprightly crumb and cracking-crisp crust.

Then, curiouser and curiouser, what looks like a large pork pie comes our way, delivered on a slate with a stone mustard jar. Has Darroze gone a bit Brit to honour Fortnum’s heritage?

Not a bit of it. This is Darroze’s take on pâté en croûte; cutting a chunk from the handsome hunk of pastry reveals the moist meat and pâté of Les Landes corn-fed chicken bejewelled with asparagus slivers. The mustard is a truffle laced, sinus-scorching Dijon, and the clean slate is finished with pickled, perfect vegetables so tiny they could have been designed to tempt pixies to get their recommended five-a-day.

If the pickles are the picture of health, then the salt cod brandade is the stuff of sin; ludicrously, lusciously rich, almost béchamel-like potato puree punctuated by the satisfying salinity of salt cod chunks, deep-golden breadcrumbs atop lending a very necessary crunch. Nutmeg whispers rather than shouts, exactly as it should. It’s a starter, but one fears a single spoonful too many could finish you off.

Fittingly for such a bewitching dish, the last starter is served in witches’ cauldron-esque pots. The stew comprises tiny chickpeas which provide just the right bland canvas for the assertiveness of chorizo; both marrying quite marvellously with generous chunks of octopus that’s been beaten and roasted into melting-soft submission. I could happily eat all eight of its legs – as it is, I eat more than my fair share.

It’s probably a good thing, then, that the main course is a light, bright plateful – a well-judged move on Darroze’s part, and one, one suspects, derived from extensive experience in filling people with just the right amount of good food and good cheer.

Hake Koxkera features a good chunk of the firm fish atop a green-pea-and-white-asparagus assemblage that’s crammed with clams and crowned with half a soft-boiled egg; the latter a treat whose presence is always welcome on my plate. As we finish, left only with pools of flavoursome liquor, my earlier indiscretion of begging for the bread basket to be left at table is revealed as a wholly sensible – if slightly gauche – manoeuvre.

Beholding a small sweet tooth and a great big appetite, fine dining desserts often leave me unsatisfied. Somehow, I suspect that won’t be the case on this occasion – and that suspicion is joyfully confirmed with the precise plonking-down of a veritable trencher of a dish laden with both style and substance.

A chocolate éclair is just that – cocoa choux, beautifully-bitter ganache, a shiny, salted caramel-piped chocolate plate atop. The addition of whipped cream to the vanilla-and-lemon redolent rice pudding at once lightens and enriches the dessert served in a Kilner jar whose lid I’m sorely tempted to snap shut so I can sneak the leftovers home. Billy Bunter-rotund babas are cream-filled, flower-and-fruit decked, and sluiced with Armagnac at table.

And then, Armagnac alone; three flame-coloured examples whose respective fire and flavour first came into being in 2001, 1992, and 1978.

The Darroze-hosted evening’s at an end and, through a thoroughly pleasant, booze-induced fug, I make a critical, earth-shattering analysis: The World’s Best Female Chef can really cook.

Find out more: For information on foodie events at Fortnum & Mason, click here